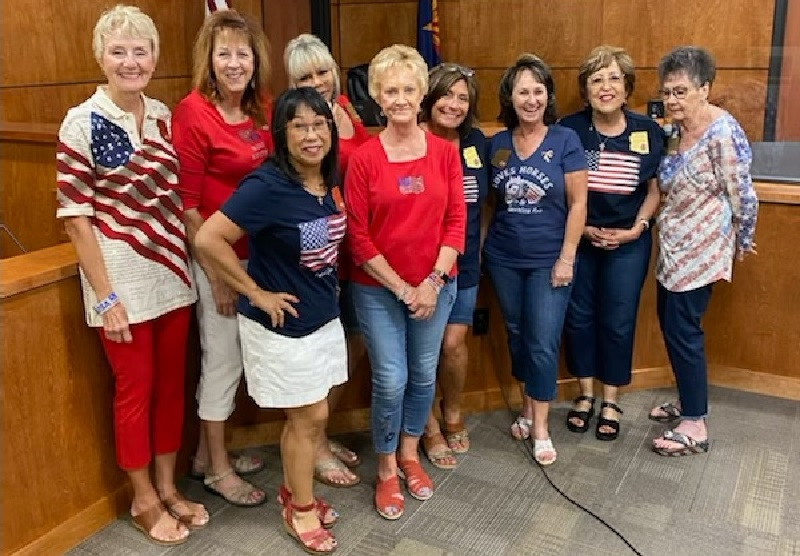 Our Board Members all dressed in their patriotic t-shirts celebrating the Flag of the most wonderful country in the world!

We also shared a "Mock Ballot" for AZ candidates to each of the 50+ members and guests in attendance.
The results are as follows:

Members are urged to get involved in the election. Become a poll watcher and/or a poll worker. There is training for both rolls currently being offered. For more information, contact Kaye Feller 805.890.6766.
Our July meeting is on the 12th with 4 engaging speakers and we will meet on August 9th for a viewing of 2000 Mules. If you haven't seen this important film please join us. Even if you have seen it, see it again. Bring your friends with you!
Kathy Leaman has asked for members to come forward to work with her on our annual fundraising event. It takes many hands to plan and make these events come together and to ensure they are successful and most of all that everyone has a good time.
This is the second full year of our club and it is time to think about the election of officers for the 23-24 term. The By-laws require the nomination committee include a minimum of 5 primary club members, two elected from the BOD (cannot include the current president) and three to be elected from the general membership. The offices to be filled are president, 1st VP – Program, 2nd VP – Membership, 3rd VP – Ways & Means, Recording Secretary and Treasurer. The committee must be elected no later than the September 2022 meeting.

The slate of one candidate for each office will be reported at the Club's Annual Meeting October of the election year (2022), All nominees must be primary members. Nominations from the floor shall be in order following the report of the Nominating Committee. Candidates wishing to be nominated from the floor shall submit to the President, prior to the opening of the meeting at which election is to take place, their written consent to serve if elected.
The election is in November if there is more than one candidate for any position. The installation of officers will be held at our December meeting.

Candidates:
These three legislators have worked very hard to get bills passed to protect election integrity, reduce taxes, supporting charter schools and school choice with the funds staying with the child and not the schools. All three of them worked hard to force the house leaders to cut hundreds of millions in wasteful spending from this years budget bill, however, the leaders made concessions to the democrats in the house and were able to pass an awful budget bill.

Chris Kelly, campaign manager for Andy Biggs, CD – 5, stopped by to say a few words. We will have Andy speak to us in the near future. 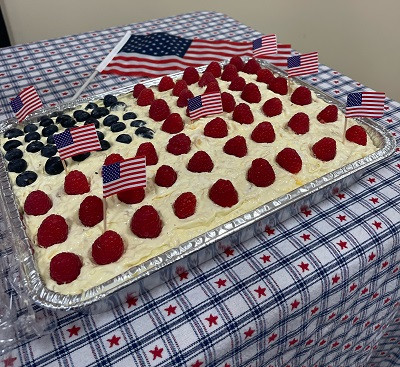 Arlene Stassinos had grilled hotdogs, buns and condiments along with Pat Aritz very tasty patriotic cakes. Thank you to both for their contributions.
PRINT